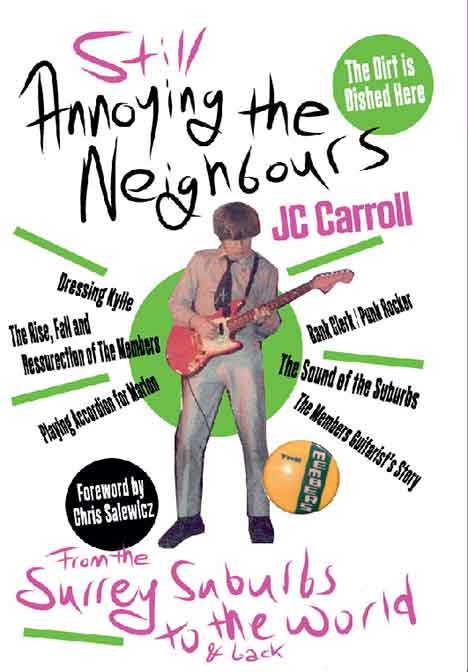 (Still ) Annoying the Neighbours is the Story of The Sound of the Suburbs The Members and JC Carroll.


This is the story of a bank clerk who writes a classic punk anthem at the age of 22.
A song that will take him and his band round the planet, A song that will turn his world upside down.
This is not just the story of a suburban boy achieving his dreams. It's the story of cycles of success, failure,
disappointment and perseverance, of elation and depression, of rocking with punk legends
like Johnny Thunders, Dee Dee Ramone, Rat Scabies and Glen Matlock, then busking in a subway, of rediscovered folk roots,

film composer, before returning to the mosh pits and auditoriums of his youth, of touring the world with The re-invented Members.
This is not a rags to riches story, this is the story of a lifelong love affair with music.

With a foreword by acclaimed Bob Marley and Joe Strummer Biographer Chris Salewicz.

Here what that say About (Still) Annoying thr Neighbours

From a post-war childhood in a scrubby zone of the home counties in which dishevelled fifties kids fished for tadpoles while the Heathrow jets arced overhead, JC Carroll – ‘the boy with three girls’ names’ – would initially take the prescribed route for a bright lad of that particular setting – a junior position in city banking – before his predilection for rock ’n ’roll sidetracked him entirely, into the emergent world of punk rock. As guitar man for The Members, JC was a driver in the democratisation of that movement, opening it up from an inner-city phenomenon to a rallying call for ‘Suburban Kids’ everywhere. While stardom flared relatively briefly for the Surrey outfit before the time-honoured pop pitfalls derailed the train, Carroll’s well-attuned survivor’s instinct would carry him through an impressive sequence of subsequent ventures. These have included film composition, panto production, and successful endeavours in the world of clothing and fashion. With The Members’ reactivation as a working band in recent years, JC has reconnected with his youthful enthusiasms, and from his present situation as a locked-down musician, looks over his lifetime and career – and the enduring relevance of his best-known composition – with clarity and insight.

Naturally, given the subject matter and the author’s ability as a top class raconteur, there are plenty of great anecdotes and characters in the book. Generally, they’re amusing, which makes it all the more effective when you get to a story that stops you in your tracks – a disillusioned Joe Strummer wondering if he can face making music again, trying to record with a perfectly attired but totally out of it Johnny Thunders, JC wishing that just occasionally he could turn off his pounding need to make more music, or the sad conclusion to Rat Scabies’ time with the Members. And of course, just when everything seems to be well, gigging and recording when he wants with people he likes, he’s hit right between the eyes by Covid 19 shutting down all live music. Merch opportunities, recording sessions, all networking or money making options shut down. There’s a lot more I could say about this massively informative and enjoyable book – like the well-chosen black and white photos scattered through the text – but suffice to say it’s a valuable document, recording how things really went down in the early days of punk, and essential reading for anyone who can still feel the exhilaration of something as perfect as ‘Sound of the Suburbs’. So if you still love the sound of that punk-rock electric guitar, this is for you.

songwriter, musician, shopkeeper, Pantomine scriptwriter, film composer and Internet concert performer.From bank clerk to punk rocker, From bedsit in North London to rock and roll heaven in Hollywood, “(still) Annoying the Neighbours” takes its title from the lyrics of The Members anthem “The Sound of the Suburbs” and traces the journey of Members Songwriter and guitarist JC “Jean-marie” Carroll a boy with three girls names catapulted from suburban obscurity into the punk rock limelight and then flung back onto the music business scrap heap .. This is what JC writes in his book about his most famous song:-I felt a responsibility to play "The Sound of the Suburbs". That song could and would bring happiness to people that had grown up to it: it was the sound of their youth and bouncing around to it in a sweaty club for three to four minutes could and would take them back to a time where they were 17 years old with a full head of badly bleached hair, a 28-inch waist, and a fake leather jacket covered in pins and badges. That song was no longer just a song: it had become a time machine, an elixir of yoof, a magic pill that they could neck with a pint of lager to bring that youth club disco in a scout hut spinning back. It was not just a song, it was “The Sound of the Suburbs”. It was the aspirations and ambitions of thousands of bored provincial teenagers from a hundred satellite towns, bottled and aged in a cellophane wallet. 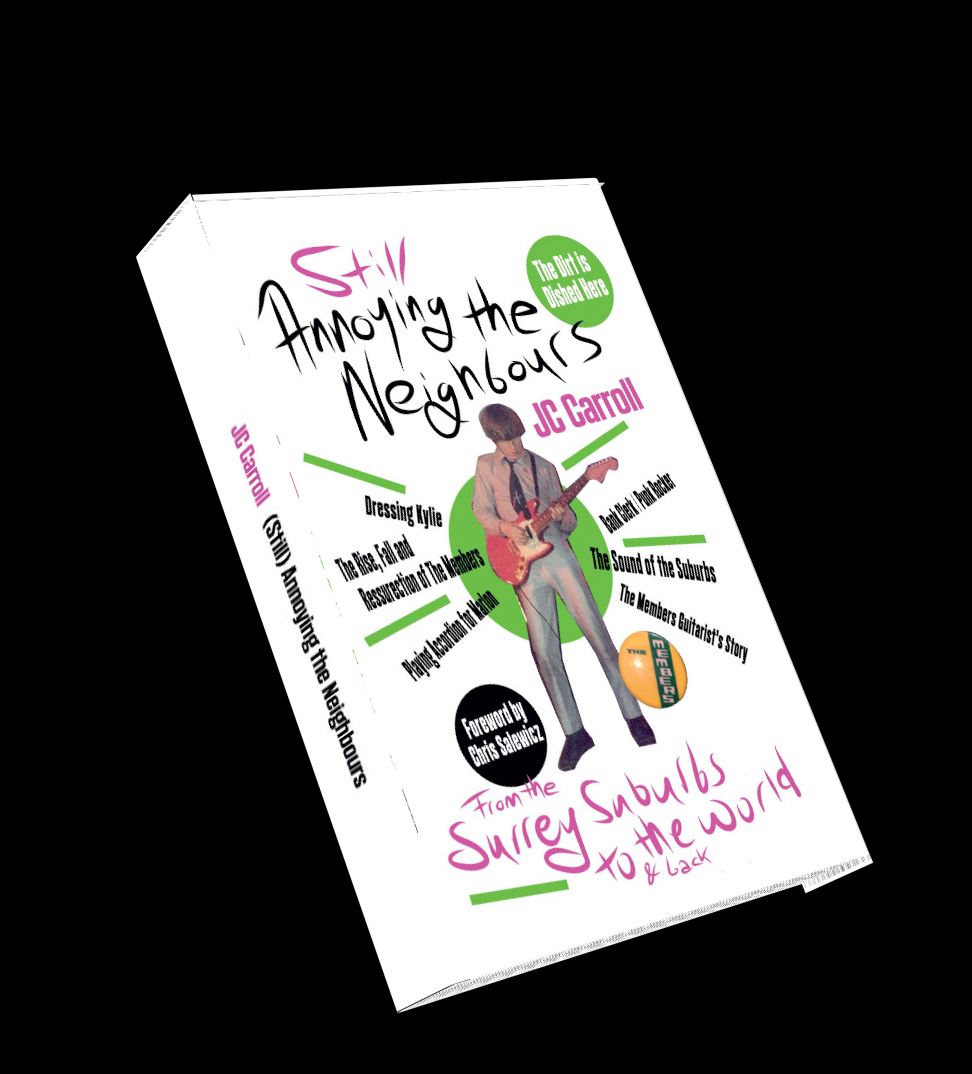